I have had the pleasure of spending Christmas with the family of one of my friends. I have been in Peterborough, Cambridgeshire, which is in the middle of England. My Christmas has been full of English tradition. It has been really good, because experiencing new traditions has largely kept me from dwelling on being away from my family.

On Christmas, we had Christmas crackers on our plates, and we opened them with each other and wore coloured crowns while we ate. Our dinner was full of typical Thanksgiving food - turkey, cranberries, stuffing, potatoes.

On Boxing Day, we took a walk around Peterborough. Apparently, going on walks on Boxing Day is also a tradition.

We also went to Burghly House, a gigantic "stately" house nearby, and wandered about the grounds. The deer were so tame that I walked right up to them.

Today, we went to Cambridge. It was so odd to be there, because it's somewhere I've always known of, but never thought I'd actually visit. It was old and beautiful, but also terribly posh. I don't think I'd be comfortable living there. I was particularly excited, because the Cambridge satchel that I received from my parents last Christmas made it back to Cambridge, where it was made, this Christmas.

An alleyway in Cambridge.

Another alley in Cambridge.

My Cambridge Satchel in Cambridge.

I am currently working as a part of the Taboo Arts team. We are in the YWAM Urban Key base, but we are a house of artists who minister together. I've been here a month now, and I have thoroughly enjoyed it.

I am here for theatre primarily, but I also do photography, music, and some graphic designing and writing for the base's magazine. Everybody asks us what a typical week looks like, and so far, we haven't had one. We have done several Christmas performances at various events around the city, including a Christmas fair in East London and at Christmas Masala, a multi-cultural Christmas event in the Asian neighborhoods of East London.

I have also been doing a lot of video and graphic design work, work that my brother does really well, but I do not do nearly as well as him. It's been a real growing experience, because I've had to rely a lot on God for the proper skills to get things done. I really like that I am being stretched to do artistic areas in which I am not as naturally gifted.

We are also planning for the arts internship that I will be a part of. It starts in January, and in March and April, we are going to be performing a production in London and in Amsterdam. It will involve aerial acrobatics, music, dancing, theatre, and visual arts. I have been involved in the conceptual work, as well as the practical aspects of how to use the theatrical space, and it has been really fun to put the knowledge I gained in my university degree to work in a Christian context. Now, I'm really glad that I went to a university to get a liberal arts degree, and not just to acting school. Theatre, especially in an arts team, is more than just one aspect. You have to know how to do all of it. I take back all of the times I was frustrated while doing sound, lighting, and stage design training. God knew what He was doing!

We are called Taboo Arts because, in this day and place, the name of Jesus is taboo. There are places in the world, and even in London, where we can not openly speak about God. But what Jesus did was taboo in His own time. We strive to do that, as well. I am learning what it means to be a warrior for Christ. We are not here just to create art; we are here to fight for the Kingdom of God. And we do fight.
Posted by Rora at 7:26 AM No comments:

We spent two weeks in Newcastle, preparing for and performing in The God Story, an event to tell the story of God in an entertaining way to young people. Our team was the drama team, but we also spent time passing out flyers and talking to people about God.

I was even given a free haircut by a hairdresser-in-training, and she asked me about how to hear the voice of God, who God was, how Jesus saves, etc. I was surprised that people actually ask questions like that, but it was a fantastic conversation!


Here is a street at night: 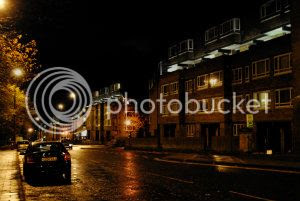 Amy at the river: 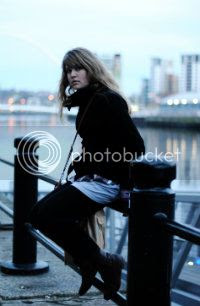 The Newcastle bridges at night: 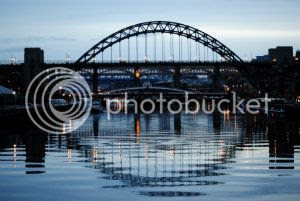