building out of the ruins

Last week was Notting Hill Carnival 2015, and for ten days before that, we had the seventh annual Bones Camp. It was my fourth Bones and Carnival this year, and I must say, I enjoyed this year more than any of the previous years. Not only did I begin to pray and intercede for the Carnival and camp beforehand, but God also helped me take my hands of control off more, so I was able to enjoy instead of constantly trying to make sure that everything was completed at the assigned time.

Bones Camp is the biggest outreach that our team hosts every year, and it is a twelve day camp for Christians around the world to come and prepare Notting Hill for Carnival. We do daily evangelism and worship times, and we all (over one hundred of us this year!) live in the church together. We also prepare the float and costumes, music, circus skills, theatre, and media for the two days of Notting Hill Carnival, which is the second largest Carnival in the world. The church that the team always works out of is right in the middle of Notting Hill, which means that we are right in the centre of the Carnival. We don't even have to leave our block to see over a million people at Carnival.

Bones is always the hardest part of the year for me, because we work nightly on constructing the float and costumes until 1 or 2 am (or later), we live all together in a church without regular showers, and because we have to fight spiritually against the enemy who knows that we are in Notting Hill to take ground back for God's Kingdom. However, I have always found that I go out of Bones differently than I entered. God uses it to squeeze bits out of me that need to be gotten rid of in order for me to show more of His glory.

One of my favourite parts of Bones this year was getting to have deep conversations with so many people, campers and members of the Notting Hill public alike. I'm not fond of superficial conversations, and this year, I had the opportunity to talk quite deeply to others about what God is doing in their lives and about the joy of having an intimate relationship with Jesus. I love how open people are to talking at Carnival. It is the easiest weekend of the year to talk to Londoners, because they come to Carnival seeking connections with others.

This year was different than previous Carnivals, because instead of doing a parade, we stayed on our block and hosted block parties for the people who came by. We built a massive eagle whose wings took at least four people to hold each one. We had two amazing DJs (one of whom was a Christian rapper), incredible drummers, and stilt walkers to grab the attention of the crowd. As they came to our block party, we handed them slips of paper with God's promises for their lives written upon them. Those started many conversations with people, because they rarely hear that they are loved, that there are bright plans for their futures, that God is near them.

Carnival felt different this year, as well, because it felt as if we owned the land more. We have been investing in Notting Hill since long before I came to London, and this year, we stayed on the land God had given us, and we declared His truth there. Even the constables present on the blocks around us knew who we were. Every year of Bones, I see more of God's presence. This year, I saw it in the compassion on the faces of the Bones participants. They went out to reach the crowds at Carnival with conviction and love that were palpable. I saw it in the favour that we had with the various civic authorities who came to see what we were doing and ended up unable to interfere. I saw it in the faces of the people attending Carnival, who through drums, stilt walkers, DJs, and tiny slips of paper containing glimpses of God's desire for them, encountered life-changing love. 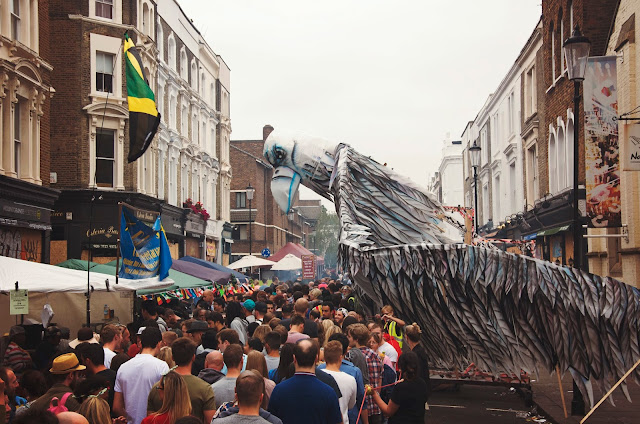 The eagle over the crowds outside the church. 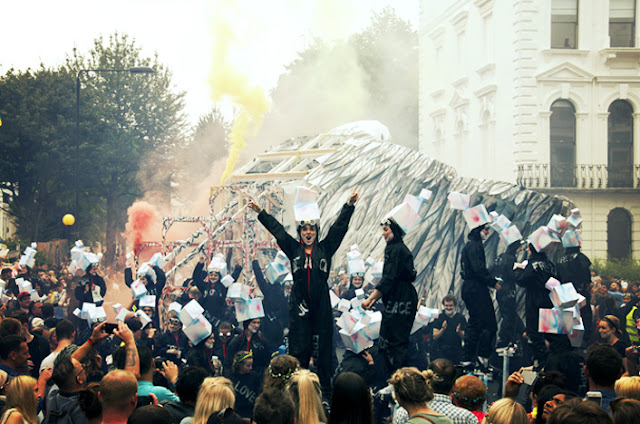 The stilt walkers and eagle in the roundabout 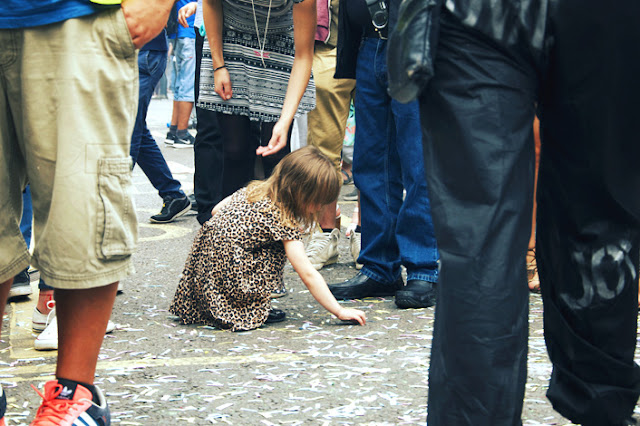 A little girl picking up promises from the ground. 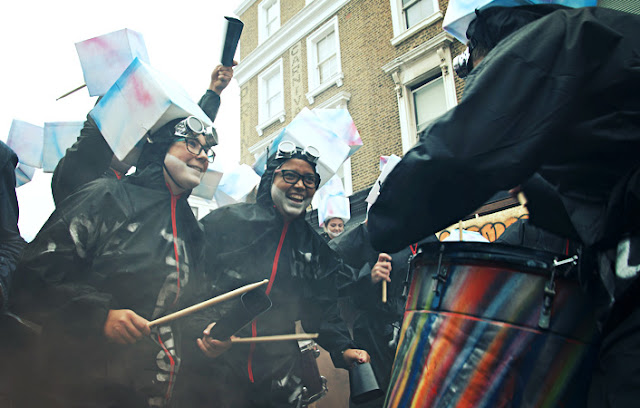 The drummers, full of joy 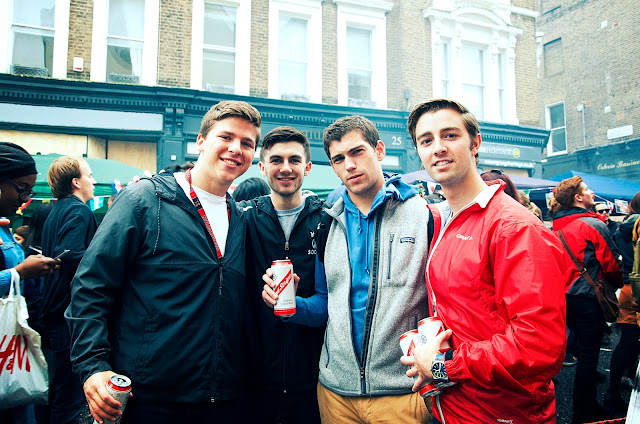 Four guys from Boston that I met 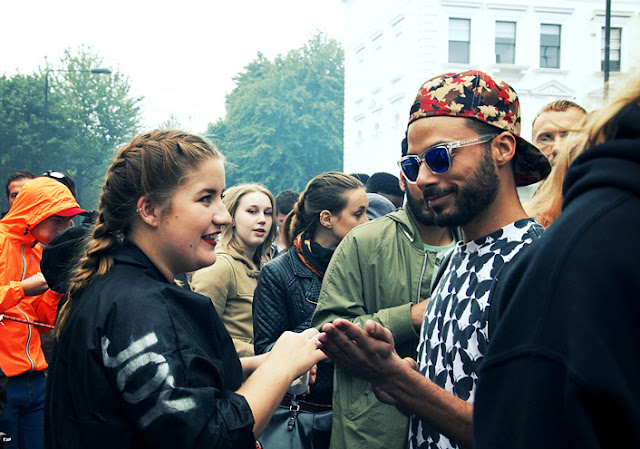 Maddie giving out promises to the crowd. 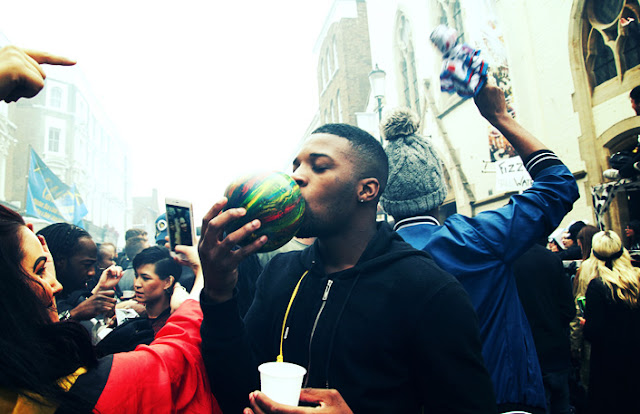 A man taking laughing gas from a balloon in the middle of the crowd. 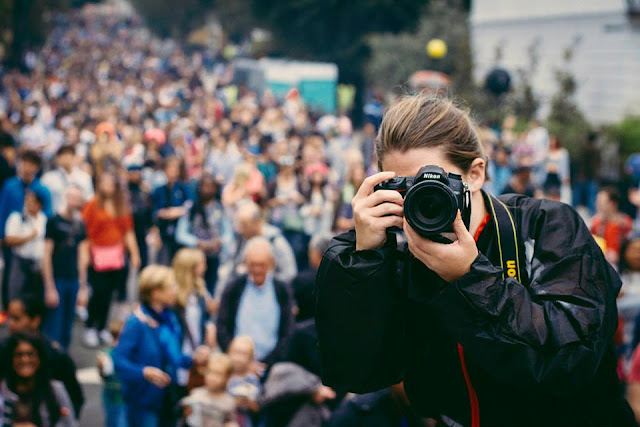 Me in my natural habitat, photo by Felix Elias 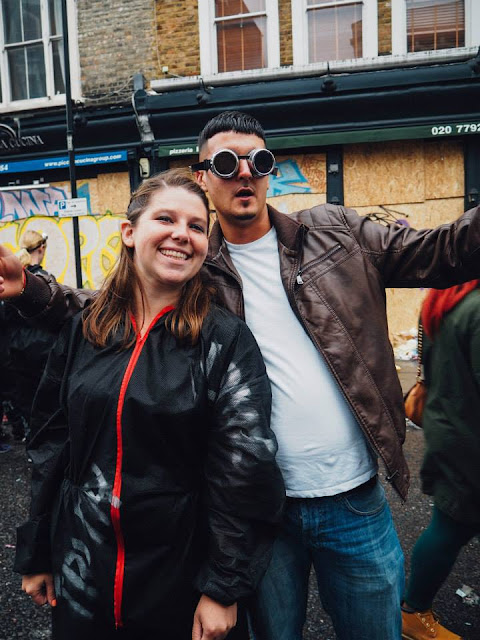 Me with a guy with whom I spoke, photo by Maddie Howes