Jesus called Lazarus back to life. When it seemed as if everything had been taken from Lazarus - including life itself - Jesus gave it all back.

It probably seems sacrilegious, but I wonder how Lazarus felt about it.

I've been wondering about that a lot more in the past two weeks, since the Lazarus Project (aka the mercy ministries aspect of our base, which is currently primarily three of my roommates and myself) started working with several different homeless aid charities in Camden and in King's Cross. The various councils for the boroughs of London have been cutting benefits for the homeless, which means that more and more of them are kicked out of council housing and are living on the streets. There are double the number of homeless people sleeping on the streets since 2010.

On Friday nights, we work with Streets Kitchen in Camden Town. The men in charge wheel the food in a trolley from a warehouse about twenty minutes away, and together, we set up tables of hot food, soup, tea, and coffee. Last week, the warehouse lease was terminated unexpectedly, which led to a late set up. The homeless in the area were frantic, because they rely on the food that they are served by Streets Kitchen volunteers. They thought that they would be both cold (it was around 0 degrees Celsius) and hungry. It is actually a dangerous condition to be in, with several of the homeless of Camden dying from exposure and being found on the bank steps the following morning.

While all of these facts are alarming, they are not what bothers me the most.

What weighs most heavily on my heart in all of this is the twenty-somethings who are sleeping rough (another term for being homeless). I  met a twenty year old lad called Luke whilst volunteering with Todos London, another charity that feeds and clothes the homeless at Kings Cross Station on Wednesdays. Luke is from Walthamstow, which is in North London, and his mum still lives there. He had a job working in a pub, but he quit because he wants to earn more than minimum wage. But now he's sleeping outside of King's Cross Station, because he's tired of living in a squat with loads of drug addicts (of which he is not). There is no reason that I can see for Luke to be homeless. He is young, healthy, and strong.

So why is he still homeless?

Then there's Scottish Tam, a girl around my age whom I found in a sleeping bag fort in front of a closed shop on the Camden High Street. She was just lying there with two other homeless men in 0 degree weather. When the other volunteer that I was with asked her why she was still there, she just shrugged.

Why are so many people in their twenties, who are healthy and able to work, homeless? It is something that I do not understand, and it is something for which there is no easy solution.

To be fair, there's not much of a solution to any other aspect of homelessness than feeding them. We cannot provide them with low-cost accommodation or jobs. And while there are different charities across London to help with different aspects of homelessness, we can't help force them to choose not to be homeless.

But the Dinner Club that we run with Notting Hill Community Church fortnightly on a Thursday has taught me that we can befriend them. We can get to know them, to see them through seasons, and speak truth into their lives.

In the Message version of Romans 8:12, it says, "if you work with the disadvantaged, don't let yourself get irritated with them or depressed by them." That is something that it is crucial for us to learn in this time, especially as the Lazarus Project grows and we encounter many different people in disadvantaged situations. It is also something that I am finding it difficult to learn. I just want to be able to help. But what if I can't do anything, or if the people that I would love to help don't want help? Which brings me back to Lazarus: I wonder how he felt about being raised to life again? Would he have rather stayed in Heaven? Or was he happy to have another chance at life, to go in with the new perspective of somebody who had everything taken away, then given back to him again? 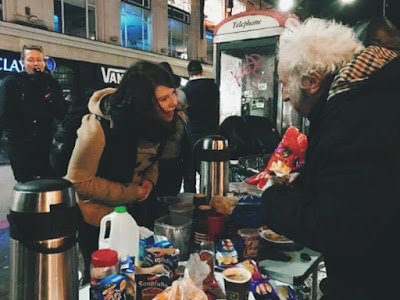 Working with Streets Kitchen in Camden 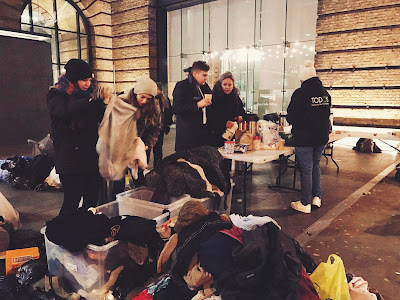 Amanda and I working with Todos London in King's Cross 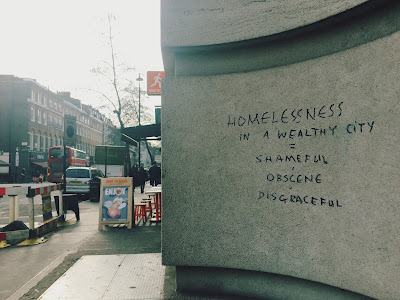 A reminder I found on Baker Street today