when you learn to walk your dreams

For several months, we as Hope and Anchor Community Church have talked about our desire to have a congregation that looks like the neighbourhood outside the church doors. Our real passion is to be a church on the streets, and not just a church that is holed up in a building, enjoying a worship service but never impacting the neighbourhood.

With Lazarus Project, several of us spend time in the streets of Camden, feeding the homeless alongside a project called Streets Kitchen and talking to and checking on the homeless and needy with whom we have relationships. We have been wondering what it would look like for the homeless of our streets, the people who seem most willing to have relationships with us, to become a part of our church. And, if nothing else, it is cold. We have a warm space for them to be in for a few hours on a Sunday.

While a few of our homeless friends have ventured into church once, they haven't repeated their visits. They are a transient community. It is hard to stay in touch with them if we don't find them outside, because they rarely keep phones for longer than a few weeks, if they have them at all. So we don't know why it is that they don't return. But we want them to return.

Before the service last Sunday, Sara and I talked to a homeless man called Sam. It was a fiercely cold day (we had a week of snow last week - and London is not prepared for snow), and we invited him to come inside of the church to warm up. We assured him that he didn't have to participate, and that if all he wanted to do was sit in the back, that was fine. So he came along and sat in the back, and after serving him tea and biscuits, we left him to warm up.

After the service, Sam stayed sat in the back of the room. I began helping to clear away our equipment, and as I did, I saw our pastor go and kneel down in front of Sam. They stayed that way for a while, and while I do not know what was said, what struck me the most was the posture. The busyness of tidying away swirled around them, but all of Chris's attention was on Sam. Before Sam left, he told us some of the things that he needs. His bag was nicked last week, so he is without many essentials, but he was hesitant to ask for everything that he needed.

On Tuesday evening, Chris took some emergency blankets we'd ordered to Sam and his friends. Sam had told us that many of the homeless men had to walk around all night, because they hadn't anything to keep them from freezing to death if they went to sleep. Yesterday, as I walked down the stairs at church (more tidying), I found Chris with Sam, who was trying on several pairs of shoes. One pair I recognised as Chris's own, a sturdy pair of trainers in which he's walked across the world.

Chris would perhaps not like me sharing this, but I am going to do it anyway, because it struck me. This is what it looks like to be the church in the streets and to welcome the streets into our church. It means giving them what we have. It means not putting demands on their behaviour. We say that we want to meet people where they are at - and maybe this is what it looks like. Maybe it looks like letting a homeless man sleep in the corridor during movie night. He doesn't have to participate, because what he truly needs is a safe place to catch forty winks.

We don't really know how to move with this, but I think that's okay. Because we asked God for this, and He has seen fit to do it. So now, I think that we just have to keep following Him and doing our best to be faithful to His dream.

I really hope that Sam comes back next week. 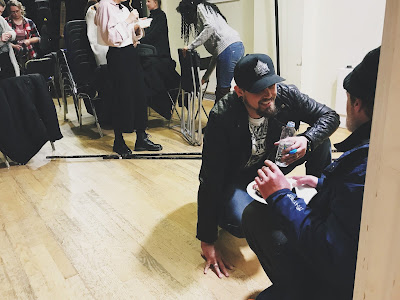