the Saviour and His hands

Last weekend, all of us joined in an evangelism event that was happening in Trafalgar Square. When we got there, we were amazed to see a stage set up, a trailer that hosted a sound system, and tents and banners loudly proclaiming prayer, massages, etc. Several different churches had come together to reach the whole of Trafalgar Square, the centre of London, with the news of Jesus.

We got to lead worship, give free massages, and pray for people that came to us. On the main stage, various Christians were preaching and giving testimonies about God's ability to rescue us.

I was surprised to find a young Indian man willing to talk to me about Jesus and faith. I kept expecting the conversation to end, for him to remember something more important that he had to do and walk away. But he kept listening. I explained how Jesus came to rescue us from our lives of sin and certain death. I had forgotten how complicated it is to explain the Gospel to somebody who doesn't have a foundational knowledge of it. Most often, the conversation ends long before any talk of Jesus's substitution for our sins comes up. When I asked him if he wanted to ask Jesus to be his Saviour, he said yes. We went to a quieter part of the square, and he prayed.

But that isn't the end of anything. It's just the beginning.

The thing that I've learned about evangelism is that the end goal is not for us to lead people in a prayer. It isn't even for them to be able to say, "Jesus is my Saviour!" The Christian life is not about saying a prayer; that prayer alone, uttered and forgotten, does not bring transformation. Being a Christian, a true follower of Christ, means going deeper and further than a prayer. It means opening our hearts to being changed by the Creator of the Universe. It means letting Sovereign Hands mould our hearts. It means letting go of the old man, the sinful, selfish, independent human, and opening ourselves up to being divinely, and slowly, transformed into the image of Christ.

I invited this man to come to the church that we are planting in Camden, and he said that he had plans with his mates, but that he'd try to make it. Unfortunately, he could not come. This weekend, I texted him again, inviting him to come. I'd been praying all week, beseeching God to move in his life in such a way that he could not be kept from going deeper with his newfound Saviour. And this week, I watched him come down the stairs in the Costa and join my family in our new church in a Camden coffee shop. I listened as the guys spoke with him and told him about the Bible. I watched my family embrace him, invite him into our home, and help him to take the first steps past the victory of the Cross.

You see, the victory of a Cross is not a one-time thing. That's why the Bible tells us that we must walk in victory and run the race set before us. It's not like when athletes take a victory lap, then disappear to change and wash and eat. We must continually fight for the victory of Jesus, because it means laying down the very bits of us that are not victorious. It means following God in victory and trusting what He says is best.

I am humbled whenever I think of the past week and of God allowing me to be a part of this race that has begun. God didn't have to use me; there were plenty of other people in Trafalgar Square willing to talk to this man about Jesus. And from the openness of this man's heart, I think that others have helped prepare the way before. I am also both humbled and joyful when I see my teammates open their hearts to others to draw them in. There's a beautiful fragrance of Jesus in the room when it happens, and I know that we are doing what God has us here to do. We are not perfect; we each struggle with various things in our lives. And still God has called us here and uses us. We are loving the ones He sends us. We are so lucky to get to be the ones that He has called here for this time. We are so blessed to be called by His name and to get to follow Him in shared victory. 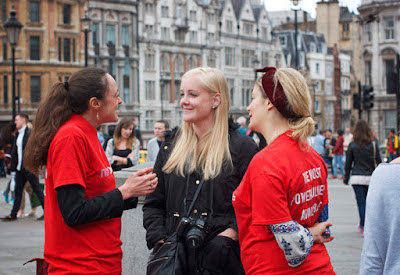 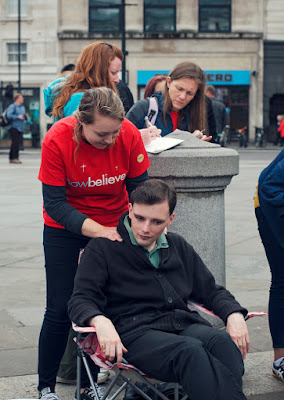 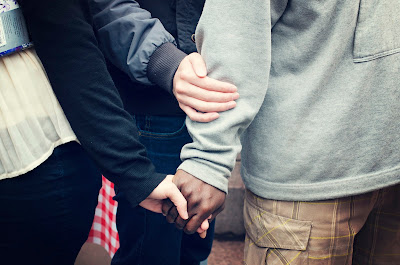