Tuesday night ended both our Bones Camp/Notting Hill Carnival outreach and the Discipleship Training School that I was co-leading with Melo and Andres, and the leaves have begun to litter the kerbs, which leads me to believe that autumn is here. But perhaps you are in warmer climes, and you are still enjoying the heat of summer (shoutout to my parents and grandparents).

Anyway, now that the British summer is over, I finally have the chance to sit down and share what we did (aka a summer-y).

This summer, I helped to lead a two-month outreach around England for our March DTS and June Internship. We went to Notting Hill, where we did prayer walks and evangelism in preparation for our Notting Hill Carnival festivities. Afterwards, we traveled to Islington in North London, where we stayed whilst our base hosted the International Arts + Sports Gathering for artists from around the world. The week after that, we helped New River Baptist Church to run a holiday club (aka a VBS) for children on the estate where we were staying (an estate is social housing). Some of us got to create and pioneer the teen portion of the holiday club, and we taught the teenagers parkour, football (aka soccer), fashion design, and writing as well as having film night and American culture night. It was amazingly comedic to watch them learn to play American football. From there, we travelled to Cornwall (the western-most part of England) to volunteer at Creation Fest, a week-long Christian festival. Afterwards, it was back home to London and Bones Camp, which, as I said, finished three days ago.

And there you have it, a two-month outreach in one paragraph.

But what I really want to share with all of you is a conversation that I had with God several times this summer. After all of the evangelism that we did in Notting Hill in early July, I began to get a bit frustrated. Conversations weren’t going anywhere, and I realised that it had been a long time since I had gotten to be with somebody as they made a faith decision. Sure, I’ve had a hand in the process. I’ve gotten to disciple and watch many people’s lives as they chose to change for Christ. But I haven’t seen the moment when a person chooses to give Jesus everything. And it was really starting to frustrate me.

At Creation Fest, we were each assigned to teams that we worked in for the week. My team was the Connect Team, or the team that prayed with people at the end of the “Big Shed” sessions (the main talks that most of the 4,000 people on site at the festival attended in the morning and night every day). I thought that surely I’d get to help somebody receive Christ, since that was what the whole festival was geared towards. Families literally brought their unsaved neighbours to camp with them for a week just so that their neighbours would meet Jesus. It was incredible. But as the days went on and I had the opportunity to minister to many, still nobody made a decision to follow Christ.

Enter Connie. Connie is well-known across YWAM England as an evangelist. When she enters a place, people receive Jesus. I remember being with her on a street in Glasgow and watching her talk to people. Large groups or one-on-one, they all decided to meet Jesus. Connie had breakfast with me one morning at Creation Fest, and she asked how many people had met Jesus. I had to tell her that nobody had. Then she gave me one of the salvation bracelets that she uses to tell people about Jesus and told me that I’d need it.

Later that day, I got to be a part of three women’s faith decisions. That night, as I was standing in the back of the Big Shed, a teenager came to me, desperate for Jesus. It turns out that he’d gotten in trouble with the police at the festival skate park and realised how much he needed to meet Jesus. There wasn’t a Bible around, so I used the bracelet Connie had given me to explain salvation. He wore it around his wrist as he went to re-join the teens for Milkshake Night.

It didn’t end there. I was excited, but I wasn’t satisfied. And do you know why? Because I realised that I’d never seen somebody receive Christ at Notting Hill Carnival. When Chris met with us before Bones Camp began, he told us to raise our expectations. He said that God wanted to do something incredible. So for several days, I wrestled with that. I wanted to see salvation, but I didn’t have a lot of hope for it.

On the Saturday night before Carnival, we were outside until 3:30 am, preparing the angel costumes. I watched Chris lead a man to Christ in front of us. The man came up with marijuana and somehow ended up leaving with Jesus. It gave me hope, and when I came out of the church again a few hours later to take photos, I stopped to talk to the first man that I saw. He was an older Belgian man. At the point in the conversation where I normally would have said goodbye, I decided to stay and ask him why he didn’t believe in Jesus. Fast forward a few (very  awkward) minutes, and he received Jesus.

On the Monday afternoon of Carnival, whilst I was on stilts in an angel costume, Peri and I talked to another man. We asked him if he believed in Jesus, and he said no. But as we talked to him about how much Jesus loves him, he started to cry. He really wanted to receive Jesus, and he prayed to receive him before we could even work up to leading him in the prayer. It was incredible to stand in that swirling chaos of high and drunk people and to watch a man give his life to Jesus.

This summer is a crazy blur. When I look back at everything that God did, I am amazed. We had artists come from all over to share their hearts for God and the arts. We got to help several different churches and organisations in their summer activities. And we got to be God’s hands and feet across this city. I am well tired now, but it was worth every night of little sleep. It is always worth it to see God move in mighty ways. 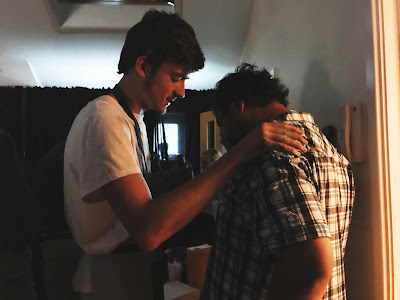 Floris, one of my DTS students, praying for a man at Hope and Anchor Community Church 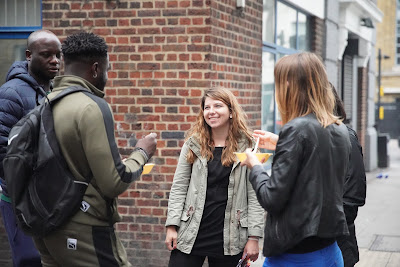 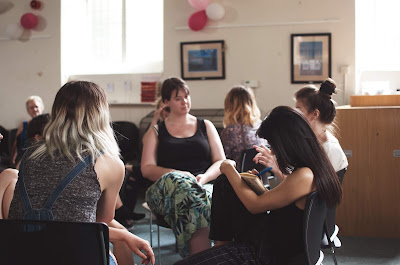 a session of The International Arts + Sports Gathering 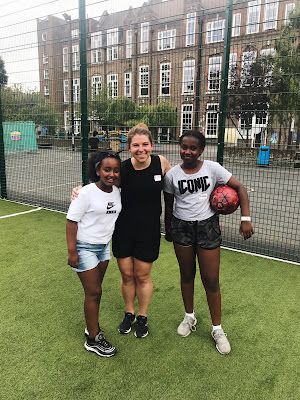 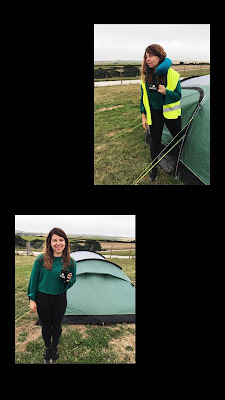 Camping expectations vs reality (from Creation Fest in Cornwall, where we camped for nearly two weeks) 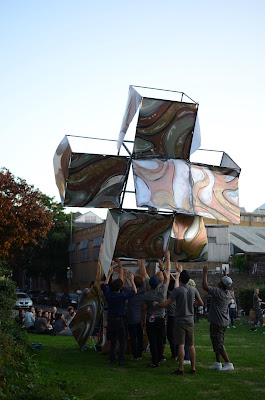 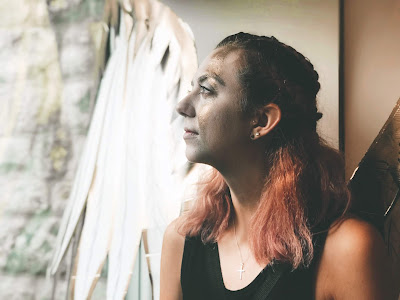 Courtney in the angel costume for Carnival 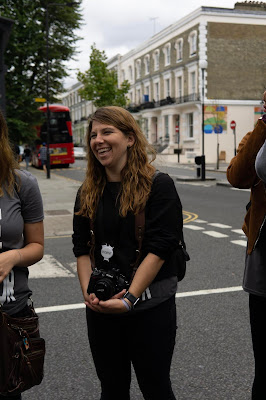 (thank you to Joseph, Alexa, and Nestor for the photographs of me!)