I know that it has been a long time since I have updated, and while I would love to fill you in on everything, there isn’t enough space on this page! Luckily, we’ve done a team update all together about our summer, which you can check out here: https://spark.adobe.com/page/vIc7qgBNpiajP/?fbclid=IwAR1PwdBnWnrZ6f2c0FrQcJ7R5qUl8ug4HrD40c0nKPNxG_cnBGJ3Ki-Lhpc

On to other news: I am a British citizen! I had my ceremony on Tuesday, which means that now I am a dual British and American citizen, so I can live and vote and have a job and raise British children here. This has been over nine years in the making, with a few bumps in the road along the way (you can read back through this blog to see those!), but it is amazing to see God’s faithfulness through all of it.

And now for what I really wanted to share with you:

On Wednesday evening, Raya and I went to a talk at a local church, the Belfrey, by Eleanor Mumford (she and her husband founded Vineyard Churches in the UK), and she said, “The church is not declining in the UK. God is calling people to Himself, and they are meeting Him.”

At first I was skeptical, because I live in the reality of church here. But then, I realised that she is right. Something that I deeply admire about the church here is the way that Christians have to fight and be dedicated to God. There are so few Christians in workplaces, in schools, that they have to be willing to stand up and look different. It isn’t normal or expected to be Christian. The youth that we worked with at camp this summer talked about being the only Christians in their year groups at school, or having only one other Christian friend in the whole of their class. Everybody knows that they’re different!

I’ve also seen hunger for God and to be a part of the church that it so beautiful (and convicting)! Last week, I met with a young woman who is a Christian in a sleepy village outside of York. She has to get two buses into town every Sunday morning, and because of the bus timetable, she can’t attend her church’s youth and young people’s service; she goes to the family service with the young children. But she still makes it a point to go to every activity that she can, even though it means travelling longer distance and a lot of planning and effort. But she so hungers to be a part of a church family that she’s willing to do it! She can’t wait for the day that she lives in York, just so that she can be even more intentionally involved in the church than she already is.

We also have a young lad in our neighbourhood who is hungry for God. He’s a part of the “bad boys” group; he rides his bike round with them and gets up to all sorts of mischief. But he also hangs around whenever we have a worship night outside, sitting on the edge and listening to all of the worship and preaching. The other week, we were outside of the local church, meeting with our local councillor, and he and his friends came rolling out of the church in a flurry. It turns out that he had been trying to pray in the church, and he’d taken the other boys with him, but they’d started to be disruptive. He was so upset that they’d distracted him. So I took him aside, and together, we talked about how he could pray to God and what he wanted to say. In earshot of his friends, we prayed together. He wasn’t ashamed in any way; in fact, he wanted to take his friends on his spiritual journey with him.

This kind of hunger and boldness for God is the reality of the church in England. Yes, numbers don’t look great. But God is doing an amazing work in people’s hearts post-pandemic. When we speak to people in evangelism every week, we are amazed by their openness. And we are trying to remember that as we speak to people so that we are more bold in how we invite them to be a part of God’s family. But I think Eleanor Mumford is right: God - and the church - are on the move. 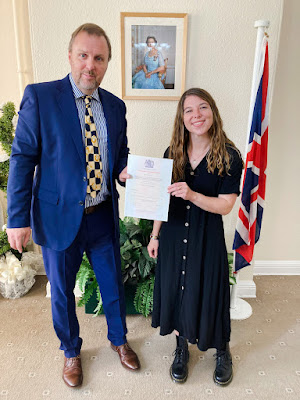 Receiving my citizenship from the head registrar of North Yorkshire